The Hensche Approach: An Interview with John Ebersberger Part 3 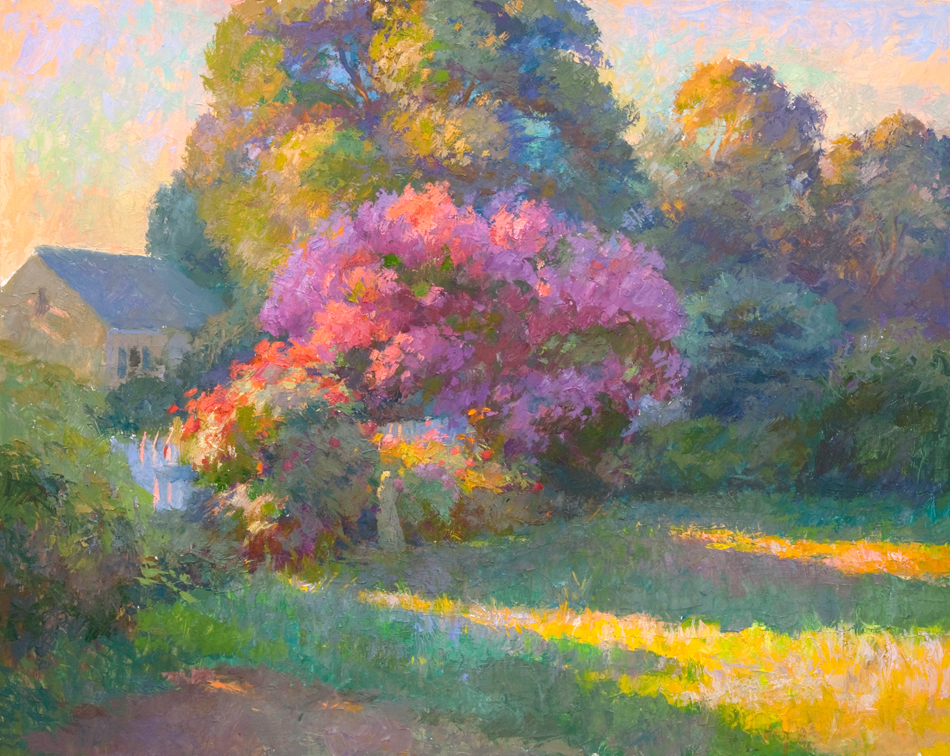 This is part 3 of my interview with painter John Ebersberger. In this post John reflects on the tremendous influence Henry Hensche had on him. Henry was a master of color observation. John gives us a glimpse into the Hensche Method.

JE: Henry was Charles Hawthorne’s teaching assistant from 1923 or 24 until 1930. Hawthorne, in turn, was William Merritt Chases teaching assistant in the 1890’s. William Merritt Chase opened up the first outdoor painting school at Shinnicock, Long Island in 1891. Hawthorne opened his own outdoor painting school in Provincetown, Massachusetts around the turn of the century. That was the Cape Cod School of Art. When Hawthorne died in 1930 Henry took over the school and renamed it the Cape School of Art. 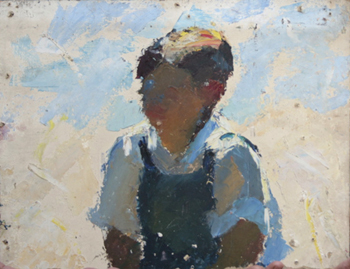 JE: Hawthorne’s teaching approach was: He got children to pose on the beach with the sun at their backs, thereby creating a dramatic silhouetted shape against the sunlight. He had his students paint with big, inch and half putty knives. This thwarted their ability to draw the thing into existence. They were force to confront these large dramatic shapes of sunlight and shadow. He viewed these large shapes as the primary element in painting., as opposed to what was being taught in the classical ateliers of France, the concept of outline being the foundation of our visual experience. Hawthorne turned this thinking around and said if you really want to paint you have to understand the large color relationships.

By posing the children on the beach with their backs to the sun, creating this dramatic silhouette, these study’s came to be called ‘mud heads.’ The name ‘mud head’ came from the fact that the shadow note of the flesh took on a muddy color. They were painted on masonite. When Hensche took over the school he worked with the putty knives for awhile, but that gave way to a more painter-friendly painting knife. He decided to break the problem of color perception down to it’s absolute essence. Instead of posing models on the beach he came up with the concept of painting blocks of wood in outdoor sunlight. He took away the idea of subject matter as being a distracting element. So now you only have a light plane, a shadow plane and a cast shadow plane.

I use these primary exercises in my classes and I find them very effective. Henry referred to these as being similar to a musician playing scales before a performance. It’s not the performance itself, but it’s the anticipation of performance. You’re limited to working with more rudimentary elements. Your learning, as it were, the vocabulary.

TS: Breaking everything down into bite-sized chunks. 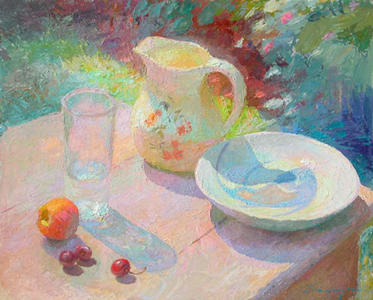 JE: Yes, you have to isolate the problem to understand it. If you paint a figure you have to consider proportions, anatomical elements, and learn color at the same time. It’s a lot to swallow. The blocks isolate the problem so you can study it separately. Eventually it all comes together. Monet painted 20-some Rouen Cathedrals, and if you look at the top left tower you will see that it’s much like a block with a light plane and a shadow plane. It’s not so much that you’re painting a tower or a block of wood, the joy is in ascertaining the beauty of that color. You’ve got to be able to see the beauty in the simple phenomena, even if it’s just a simple block on a table. As you progress in your study you’ll begin to add more interesting objects such as a bowl or piece of fruit. But this is where you start out. The basic element of ‘What is the color of the light in relation to the shadow.’

JE: If you can take any object and set it out in sunlight, and paint the color of the light plane in relation to the shadow plane, you can recreate the illusion of that object in that light key. The basis of this thing is so simple it’s easy to miss. The simplicity shows the very foundation. The perfection of your color perception is not simple. It demands devotion of continually perfecting that perception. The cool thing is, since you’re studying reality, it continues to unfold. You never get to the end of the road! Henry’s paintings developed from the time he was a kid to the time he died when he was 92 years old. His most beautiful paintings were painted later in life, when he had the full maturity of studying color. He applied this training to all genres of painting. I think he single-handedly invented a genre, the outdoor still life.

JE: He was probably one of the most outstanding colorists, if not the most outstanding colorist that ever lived. Often times people say Monet was the greatest colorist who ever lived, and I think you could make a case for that. The intriguing thing about Henry is that he didn’t do exactly what Monet did. Monet was exploring the varieties of light keys in nature and did so more extensively than any artist before or since. He painted 40 paintings of the Waterloo bridge. The Rowan Cathedral, the haystack series, the morning on the sand, he hand the poplar series he did when he lived at Giverny, and many people love the water lily series which I don’t think are as beautiful as some of these other series I’ve named.

What marks Henry as unique from Monet (and I’m not saying one is better than the other) he modeled form with color. What I see with Monet is that he was dissolving color within a certain light key. He spoke of the ‘envelope of light.’ In fact, Cezanne was sort of a reactionary to the impressionists because he wanted to return structure and form to painting that the impressionists had frittered away. Henry came from a very strong figurative background. He studied figurative sculpture at the Bozares Academy in New York. He was doing life size figurative sculptures. Henry takes color and models the form, instead of dissolving it. 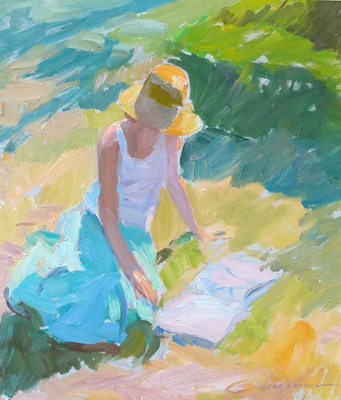 JE: Henry is Hawthorne’s best student in terms of color observation. Henry always talked about the quality of the masses. By that he meant the large shapes of color. You have to get the large masses of colors correct before you put in all the little details. The primary aspect was about how to stage your masses. The cliché’ of impressionism is that impressionism breaks down the complex colors down into it’s primary constituents, and juxtaposing strokes of primary and secondary color close by so that visually from a distance there is an optical mixture which is scintillating and creates this dynamic color vibration. This is a well-worn cliché that has a little bit of truth, but really if you ask us, it’s the large shapes of color in relationship that creates the light effect, not the little tiny strokes that make the individual mass.

If you look at Monet, yes there is broken color. But the broken color achieves a mass quality. But it’s that large shadow note against the large light note, that’s what creates the light effect.

And you keep breaking these shifts down to a finer and finer degree, until you’ve fully modeled the form, so that you have the illusion of continuous form. The idea is that as you break the color into further and further. Look. Henry would often quote Cézanne, who said “very form change is a color change.” If you look at reality carefully you can see that. It’s fairly obvious. You’re progressively modeling form with smaller and smaller variations of color. At the end of the painting you may end up with the effect of broken color, but it’s conscious variations, versus arbitrary broken areas of color. 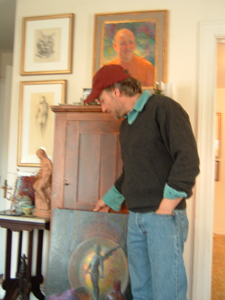 To this extend, I can perhaps see Henry as an evolution of Monet’s understanding, in that he was much more interested in modeling the form with color rather than dissolving the form in a light key. Here’s a man whose devoted his life to color. He said it’s virtually impossible to model form and retain the light key. But I’ve done it two or three times so I know it’s possible. That was his assessment of his own art.

The more you express the form, there is a liability to the light key-the more of a threat is posed to the light key. The easier it is to destroy the ‘illusionistic’ expression of the light.

Henry came out of the American tradition of impressionism. If you look historically of the painters in Boston, they were much more entrenched in the conservative, figurative. When I say ‘conservative’, what I mean is they were less given to let the form go at the expense of other things.

The French impressionists like Renior there is a much great looseness and freedom of brushstroke, and so forth. If you look at the Boston painters like Tarbell and Frank Benson, they were very good figure painters in light. Henry had much more involvement with this classical figurative approach. He didn’t trade color for form, he tried to have both disciplines coming into the work. Whereas Renoir, Pissaro, Monet, the leading French impressionists were not consummate figure draftsmen. Pissaro and other impressionists vilified artists like Sargent, and to tell you the truth, I think they were jealous.

Part 1 of my interview with John Ebersberger

Part 2 of my interview with John Ebersberger

To read the first part of John’s Interview about his work click here.

The book and/or video links above are Amazon affiliate links that generates a small amount of revenue when you purchase or rent products at Amazon. This helps to offset the operating costs of this website.